In the day of the first gig of his new promotional tour, we are happy to announce that “A Bolu, in C,” the acclaimed debut of the Dark Ambient/Drone artist S A R R A M, is now available in its digital version through the main digital stores and streaming platforms.

Here are some links you can rapidly access
Spotify | Apple Music | iTunes | Deezer
& many, many more!

We’re proud to announce a new special project. For this time, we shift from our Rock’n’Roll/Blues focus to release a record that blend ambient guitar sounds with the naturalistic imaginary of the magical island of Sardinia.

We proudly announce the release of “A Bolu, in C”, Debut album of S A R R A M.

In Sardinian language, the meaning of “A Bolu” is connected with the flight, with the velocity, with doing a task with ease and rapidity. For this reason, the meaning of  “A Bolu” is related to the extemporization of verses and rhymes, of sounds and patterns. Here the concept of “A Bolu” merges with the work of S A R R A M and with his solo album. The debut album of this ambient musician coming from Nuoro (Center Sardinia) is composed of one side – everlasting track of 37 minutes, all played by one guitar (no synths or percussions) that improvises a harmonic journey moving through the exploration of different scales, surrounded by an electric, ethereal Drone soundscape.

This ambient/drone Joint is embellished by the Album artwork, which serves as a visual counterpart to the sound suggestions of “A Bolu”. Here the music of S A R R A M meets the naturalistic shootings of Bobore Frau, a Sardinian photographer that took 10 different photos framing moments of Barbagia, inland mountain territory of Sardinia, where S A R R A M currently lives. Every photo exists in ten copies (10X10=100), one for every copy of “A Bolu”.

S A R R A M is Valerio Marras, also the guitarist of Thank U For Smoking, Charun, Spheres, and his first solo album “A Bolu, in C” was recorded, mixed and mastered by Nicola Olla at Blacktooth studio in Cagliari.

“A bolu, in C” will be out on February 10th in 100 digipack hand-numbered copies. 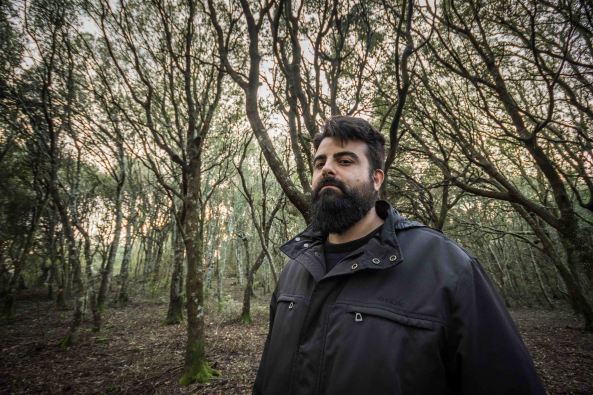